No movie quote today. Not next week either. I'll get back to them, but for now I'm going plainspeak.

Or, I could summon favors from the dark demon gods of Nor.

On the 9th or the 10th, when Antigoddess actually comes out, I'm going to post a contest type thank you thing. The prizes will be three advance (way WAY advance) reservations for ARCs of ARISTEIA (Goddess War #2), and feather bookmarks, and some kind of treat, and I'll name a character after you or a friend, and/or I'll put your pet in a book.

I don't know what the entry rules will be, but rest assured it will be something that will give me great joy while I'm on the road. I'm selfish like that.

Now I'm off to hide for another 12 days. Luckily, there's been a lot of stuff lately that's good distraction from pre-release anxiety. Like the Bat-Fleck. What the fuck, Chuck? I don't care if Matt Damon endorses you, I shall cross my arms and scowl until I'm sitting in the theater and hear the first strains of your gritty Bat voice. Then I'll probably forget about the whole thing. Because you can't be worse than Clooney.

I love Clooney, but he was the least Batmanny of all of the Batmen. And that includes Adam West.

There was also that Miley Cyrus on the VMA's thing, which I guess was distracting, but now I keep seeing that face she made everywhere. And close ups of her butt.

Oh yeah, I finally saw one thing in the previews for INSIDIOUS 2 that actually looks interesting: the part where Patrick Wilson has a lamp and the guy says there's someone in front of him saying "He's got your baby! He's got your baby!" This thing at the 2 minute mark. But they already fooled me into seeing INSIDIOUS based on one cool thing from the trailer: 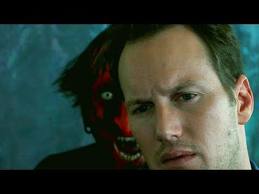 This red thing. What is that thing? I want it.
So nice try, Insidious 2. But I can only be fooled once or twice or more.
Tags: antigoddess, contests, insidious
Subscribe