So this is a long and rambling giveaway post. I should probably break it out into more than one, but being the infrequent blogger I am, this is how it goes. First off, we had a minor freak out last week when we thought Tybalt was losing weight. There were several possible explanations for this (having his fangs removed, a recent food change, stress) however, I immediately assumed he was dying the horrible death of the dead. After much obsessing, and a knee-jerk vet appointment he never made it to, we determined the likely culprit was all of the above, plus being lonely after losing his cat brother, Mojo Jojo this winter. The solution? A new catson. Everyone, meet Tyrion Cattister: 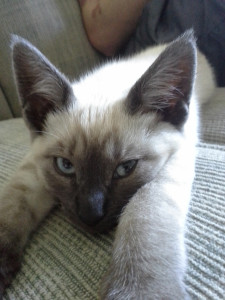 Originally, we were told he was a girl, so his name was Cersei Cattister. But then we brought him home and I noticed, well...nuts. I said, "better change his name to Tyrion." And Dylan said, "Those aren't nuts; she's a girl." And I said, "Listen, I think I know cat testicles when I see them." And then neither one of us knew what to do with that statement. Tyrion and Tybalt (we didn't do the "T-Y" matching thing on purpose) are getting along famously, after some fangless hissing. And I become skeptical that Tybalt was ever losing weight in the first place, because that kitten makes him look enormous, and his fat ass is putting my legs to sleep as I type this.

The one thing you can be sure of with a name like Tyrion Cattister, I'll never put him in a book. Which leads me to hint at another contest I'm running at the time of ANTIGODDESS' release. I'm running out of pets to put in books, is what I'm saying. I'm going to need to mine yours. It will be the "can I put your pet in my books?" contest.

But for now, let's segue into THIS contest: an ANTIGODDESS ARC with signed feather bookmark! 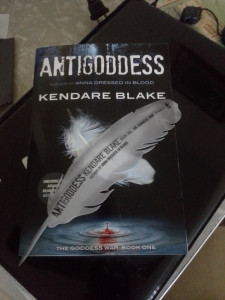 There are 2 ARCs up for grabs. I had three, but someone had a reading-related tragedy, and I was moved to help. So these are the last 2 I've got.


NOT SO FAST THOUGH!


First, you have to listen to my history lesson to find out how to comment. Why? Because, I'm a jerk, that's why.

In Antigoddess, there is a lot of allusion to the Trojan War. It's one of my favorite subjects, and the three goddesses at the heart of the story factor in pretty large in The Goddess War. Just in case you're unfamiliar with how the Trojan War started, here's a quick refresher:

One day, the gods were hanging around on Olympus, doing whatever the frick they do when they're not wreaking havoc or boning each other, and the goddess Discord (who nobody liked to hang out with because...well, discord is unpleasant) tossed a golden apple at them with a tag marked "To the Fairest."

For whatever reason (fruit shortage?) all the goddesses went Belieber crazy over the apple, until it came down to a final three: Athena, Hera, and Aphrodite. But how do you determine the fairest goddess of all?

Easy. You make a mortal teenage boy judge them like cows. I guess.

This unlucky chap was Prince Paris of Troy, who you are probably familiar with because of the famous story of Helen of Troy, or because of Orlando Bloom's butt cheeks in the film, Troy. Unfortunately for Paris, instead of allowing him to judge them fairly for their...er...fairness...each goddess offered a bribe.

Athena promised him he would become a great hero, and have great glory on the battlefield.

Hera promised him riches, and a vast kingdom.

Aphrodite promised him the most beautiful woman in the world.

He chose the hot chick, and as a result, pissed off Hera and Athena, and they pretty much ruined his life and the lives of his whole family. Killed his dad, had Achilles murder his brother Hector, sister Cassandra taken as a slave and murdered later (though she was sort of screwed already...as outlined in Antigoddess). Troy fell, chaos reigned, Aphrodite made the apple into one super-sized and very heavy earring...

SO, HERE'S HOW TO ENTER! Put yourself in Paris' place. Who would you choose, if you were offered the bribes? Why? Would you choose Athena's offer? It would be way cool to be a hero, to have a great destiny and kickass adventures. What kind of hero would you be?

Would you choose Hera's riches and power? Maybe spend your days Kardashian-ing it up poolside?

Would you choose the most beautiful girl, or boy? Snag yourself a...a...man, I'm out of touch. Who passes for hot these days?