Happy Monday, all. Today there's a first on the blog, an author interview and giveaway. I've got the lovely JR Johansson, with her debut, INSOMNIA! So...you know...read our interview, and then enter to win a signed copy in the comments! 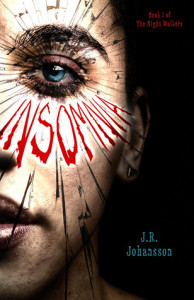 It’s been four years since I slept, and I suspect it is killing me.

Instead of sleeping, Parker Chipp enters the dream of the last person he’s had eye contact with. He spends his nights crushed by other people’s fear and pain, by their disturbing secrets—and Parker can never have dreams of his own. The severe exhaustion is crippling him. If nothing changes, Parker could soon be facing psychosis and even death.

Then he meets Mia. Her dreams, calm and beautifully uncomplicated, allow him blissful rest that is utterly addictive. Parker starts going to bizarre lengths to catch Mia’s eye every day. Everyone at school thinks he’s gone over the edge, even his best friend. And when Mia is threatened by a true stalker, everyone thinks it’s Parker.

Suffering blackouts, Parker begins to wonder if he is turning into someone dangerous. What if the monster stalking Mia is him after all?

INTERVIEW!!
INSOMNIA features some great, creepy dream imagery. Or should I say nightmare imagery. Do you have nightmares? Could you tell us about any that are particularly disturbing?
I have had nightmares off and on my whole life. I had one recurring one as a kid where aliens were attacking and I was running through my dark house trying to find my family. Lights were flashing outside the blinds and I could hear the aliens coming. I finally found my brother, but he was dead already...it was pretty messed up. Yeah, I think my nightmares definitely fed into the book a bit.
When you were writing INSOMNIA, what came to you first? The premise? The characters? One scene, or one line of dialogue? The title? Can you describe one of those special moments when INSOMNIA was coming into being?
The premise came piece by piece, the first was the idea of watching people's dreams, then what that would be the physical ramifications to the body and more importantly, the brain. It all fell into place after that. I think one particularly special moment when everything came together was when I started working on a scene a bit later in the book and Parker reaches his psychological breaking point. Suddenly every page I read or note I took in my abnormal psychology class in college became intensely relevant and it all fed into this scene. It was powerful, creepy and terrifying. I loved every second of it.
Who is your favorite character, and why?
Oddly, I think my answer would be different for the sequel, but for Insomnia I think my favorite character is Finn. He's the comic relief, but he's also so much more. He epitomizes my best guy friends from high school. He's funny, goofy and above all else an incredible friend. Finn is the guy who would risk anything to save a friend and is loyal to a fault. I loved writing every scene he's in.
If you could nightwalk, would you nightwalk anyone in particular? What would you do? What do you think you would see?
Oh gosh...one thing I know for sure is that I would NOT want this power. I guess if I had it, I'd probably watch my friend Kasie's dreams. She's kind of the female equivalent of Finn. Her dreams would probably be very entertaining. My guess is there would be at least one nightmare where her kids pelted her with miniature foam footballs. That could be fun to watch. :)
Random: What is the strangest food you've ever eaten?
Hmm...I'm not sure. I guess to Americans, my family's traditional pizza night might seen strange. We make homemade pizzas. One is your typical pepperoni and the other is a tunafish pizza. Just a big pizza with regular sauce and cheese...and also tunafish. My husband is from Finland and tuna and shrimp are regular pizza toppings over there. We tried it out once and it was really quite good. We've been having it ever since and everyone else thinks it's bizarre.
Scenario: You're at the front of the class, reading your book report on The Great Gatsby and BOOM! You're suddenly in your underwear. Surprise! It's a nightmare. What do you do, punk? What do you do?
Haha, I love how my nightmare question is calling me out. As an expert on nightmares, I'd do the smart thing and think really hard about everyone else being in their underwear until suddenly they all were. Then I'd continue giving my book report as planned and act like everything was perfectly normal. Either that or I'd scream and hide under the teacher's desk...both seem like very logical options. ;)
What are you working on now?
I've got a few projects on the burner. I am working on the sequel to Insomnia. I'm getting ready to do edits on a new contemporary urban thriller set in Philly that we just sold to Macmillan. And I'm brainstorming out kinks to three new ideas to decide which one will be my next project. So yeah...I'm keeping pretty busy, but it's all very fun and exciting!
Interview over! Intrigued? Enter to win a signed copy of INSOMNIA! Just comment below, and I'll draw a winner on Friday. Tweet the contest with @KendareBlake somewhere in there and that will count as another entry. Good luck!
Collapse