2013 has arrived. Much to the chagrin of anyone who spent their life savings building an ark. Or perhaps not. Now they'll always be prepared, after all.

Happy 2013. Hope runs hot, here at the start. Hope that it will be a better year, however you choose to perceive "better". I'm wishing us a lot of luck. In case the hope runs out...around March.

I don't do New Year's Resolutions, because I suck at them and have no resolve, and it's very depressing to fail at your New Year's resolution on New Year's Day. I try to adhere to to-do lists instead. To do in 2013: Write ANTIGODDESS #3. Edit ANTIGODDESS #2. Promote ANTIGODDESS #1. Write (or at least start writing) the book that will try to follow the Antigoddess trilogy. Go on vacation. Study French. Learn to play a musical instrument. Climb Mount Ipanema.

But now, I've got a very nice New Year's present for some lucky reader who lives in the US. A SIGNED HARDCOVER ARTICLE 5! By Kristen Simmons!! Did I mention it's signed? And it's ARTICLE 5?!

ARTICLE 5 comes out in paperback on the 8th, and the sequel, BREAKING POINT, is releasing February 12th. So here's your chance to get ready for it if you haven't read ARTICLE 5 yet. And why have you not done that? Hmm?

Anyway, to enter, all you have to do is live in the US,and comment. Or Tweet me an entry at @KendareBlake. I'll throw in a copy of Girl of Nightmares also. You can choose a signed hardcover or an audiobook. This giveaway is a short timer; it ends next Tuesday, the same day ARTICLE 5 is out in paperback! 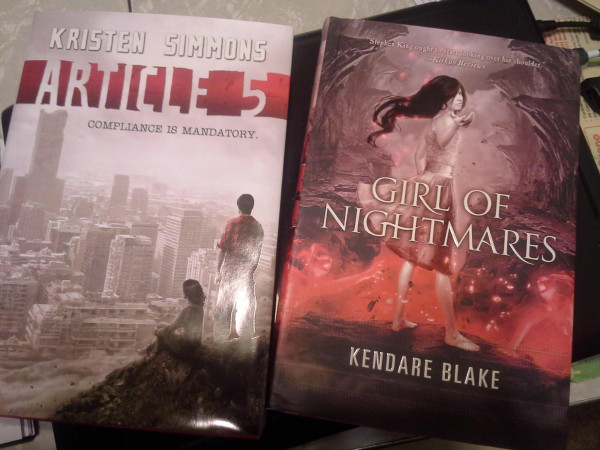 In non-writing related news, I watched the last third of the movie, SOMETHING BORROWED, and for the life of me, I can't figure it out. It seemed like just a shitty movie about shitty people being shitty. If you've seen it, and found another message deep inside, I'd love to hear it.
Collapse